Cardiff is (deservedly) becoming known as a revered musical & cultural hub, what with Sŵn Festival in the autumn, X Music Festival in Bute Park in the summer, Wales Goes Pop! next month, and artists like Rihanna including the ‘Diff in their world tour dates. However, there are also musical gems to be found elsewhere in the Land of Song, and Abergavenny in particular is churning out a lot of awesome music lately.

The flavour of our inaugural Music Spotlight is decidedly rock-y – here we’ve selected 5 tunes that show off some of the area’s newest talent.

The Attix, a duo fronted by Abergavenny teenager Chris Williams, shows off some powerful indie rock chops in the video for ‘Like A Stone’ (which I THINK might have been filmed at Abergavenny Castle & the Castle Meadows, but I might be wrong).

(Also, another Abergavenny bonus – the video is filmed in and around the Market Hall!)

‘Broken Places’ is a slightly softer, acoustic-driven offering. Its soaring harmonies would sound AMAZING live, and The Attix have already played at Green Man & Weyfest – it will be exciting to see where this talented act goes next. Follow their Facebook page to keep up with upcoming single info.

‘Fat Robot Army’ is a rollicking, melodic alternative rock track. The band hails from Newport, and regularly plays gigs in Cardiff – maybe sometime we can convince them to come up our neck of the woods. I’d like to see how this track translates onstage. It’s the most energetic track off their EP; ‘Unfriend’ also stands out – both tracks have a nice raw quality to them. Check them out on Facebook for more info on their music and upcoming gigs. If you like the tracks, Bandcamp offers a pay-what-you-can option, and I really encourage everyone to pay for the music you like – support your local starving artists!

(warning: bad language in this one!)

Stay Voiceless (the guitarist is from Tredeger/Abergavenny) describe themselves as ‘day ruiners’, but honestly, this track is…. actually really good? It’s tight and the guitars are crisp, I love a bit of male falsetto in a rock track, and the chorus is pretty damn catchy, so, day NOT ruined.

I really like this track, and apparently I’m not the only one, as it’s already getting good local airplay and has been featured on BBC Radio Wales. It’s being released as a single next month (the 22nd) so keep an eye out for that.

And finally, for now….

(I’d love to know where that name came from.)

Let’s end on a bit of ‘Power Pop’ from Aberdare!

Right, I know LOTS of things are described as “anthemic” when they’re really NOT that “anthemic” but this track actually is anthemic. The vocals are super impressive – I do like when singers sing in their regional accent. It’s not super-pronounced, but it’s there. (I’m a linguistics student, so stuff like that pleases my inner nerd.) Guitars & drums are pretty tight too; this is a really well-produced track. But yeah, this track is pretty ‘epic’ in the literal sense of the word – it took me a couple of listens to unpack it, so I’d categorise it as a “grower”, which is a good thing in my book.

They’re playing at Ifor Bach (that’s ‘Welsh Club’ to my non-Welsh uni friends) TONIGHT (the 27th) so if you are down in Cardiff, I’d go and check them out, or like their page on Facebook to keep up with other gigs.

Are you a band or musician local to Abergavenny? Do you have HQ original tracks on Soundcloud or Bandcamp? 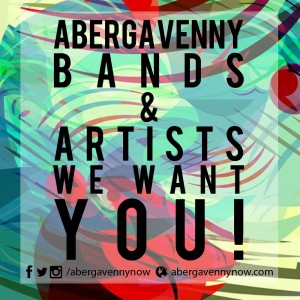 We are looking for new artists and tracks to review as a regular feature for Abergavenny Now.

If you have new, original music – singles, EPs or albums – and you’re from Abergavenny or the local area, then we want to hear from you!

We’re not looking for particular genres – we want an eclectic mix of everything from rock to rap to electronic.

What we need from you: