Local 4-piece alternative rock band, The Caspiens, launched their new single “Shoot You Down” this week. The release party at Le Pub in Newport took place last night, and according to the band’s Facebook page, was a huge success. They were supported by Tom Jenkins and Nuclear Lullaby. 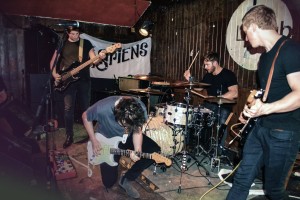 The band were formed in 2012, and their momentum has been steadily growing since their lineup shuffle in 2014. All members hail from Abergavenny/the Valleys, but their music is in the vein of classic American blues, soul and rock. The band have just completed an EP, and have received attention and radio play from BBC Radio Wales, Nation Radio and GTFM. They were also named as one of “50 bands to look out for” by WalesOnline.

“Shoot You Down” continues their ‘whiskey-soaked’, rock-and-roll influenced sound, though is decidedly calmer than their frenetic previous single “Cold Hearted Woman” (also worth a listen). Adam Ovens provides a strong and soulful vocal performance, and brothers Owen and Rhys West and Joe Wright provide the slick instrumental. The track’s atmosphere is reminiscent of Alabama Shakes, or Kings of Leon – in fact, the band cite both as influences on their site, along with The Black Keys and the Rolling Stones.

The track is perfect for the increasingly sunny days. It’s available as a free download on their Soundcloud page, so take a listen below!