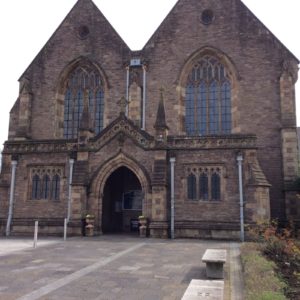 The Priory Church: history
Dedicated to the Virgin Mary, St. Mary’s was built as the church of a Benedictine priory and a cell of the Abbey of St. Vincent at Le Mans, by Hamelin de Ballon after 1087. Succeeding lords of Abergavenny were also benefactors.
At one stage it was badly run, resulting in an enquiry as the monks were said to be consorting with women of the town and the prior, Fulk Gaston, absconded with the church silver. After the Dissolution of the Monasteries, when it had only a prior and four monks, it became a parish church.
It is cruciform and large, the chancel and nave being 172 ft long (52 metres). The central tower has 8 bells and the church is mostly in the Decorated and Perpendicular styles, there being little trace left of Norman architecture. The oak choir stalls with misericords (pop-up comfort seats) and carved lattice backs date from the 15th century and bear the name of the prior at that time: Wynchestre. There is a Norman font which was rediscovered in the 19th century in the churchyard where it had been placed by a Baptist minister, John Abbot, during the 17th century as he did not believe in infant baptism.

The Westminster Abbey of Wales
This informal title has been given to the church because of the splendid tombs and monuments inside, which date from the entire medieval period and beyond, the 13th to 17th centuries. The most famous is the wooden figure of Jesse, a more-than-life-sized carving which would have formed part of a Jesse tree showing the ancestry of Christ and probably part of a reredos (a screen behind and above the altar). It is recumbent, bearded, robed and hatted, holding the stem of a tree which springs from the heart. An angel applies a cushion to the back of the head and traces of gesso and paint, red and blue, remain. H. J. Massingham admired the carving of the beard, the half-spirals of the robe and the folds of the cushion as well as the expression on the face of “weariness and resignation, dignity and calm,” which he felt reflects the spirit of the sculptor also. 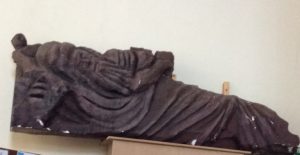 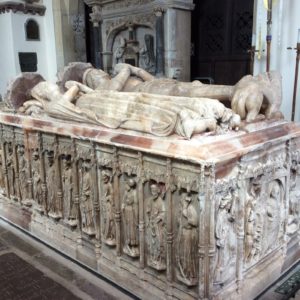 The tomb of Sir William ap Thomas, father of the 1st Earl of Pembroke. The side figures, according to Pevsner, seem to represent 12 prophets and the 12 apostles, a series regularly found in other Medieval contexts but rare on monuments.

The tomb of Sir William ap Thomas, father of the 1st Earl of Pembroke. The side figures, according to Pevsner, seem to represent 12 prophets and the 12 apostles, a series regularly found in other Medieval contexts but rare on monuments.
Personally, I find the other effigies in wood, alabaster and marble, more impressive and rewarding to study in detail. There are many worthies represented, but not the infamous William De Broase who was responsible for the massacre at the castle. The most striking aspect is the detail and the inclusion on so many of them of an animal, often under the feet. You can turn your viewing into a kind of treasure hunt tracking the creatures down – much more exciting and appropriate than Pokemon Go! Sir William ap Thomas has his feet on a lion whilst Gladys, his wife has 2 dogs; Sir Richard Herbert of Coldbrook and his wife have the same, except that her lapdogs are biting the hem of her robe. On the south side, in a recess in the wall, a knight, Sir William Hastings, has his feet on a greyhound whilst on the north side Sir Lawrence de Hastings has a bull at his feet (there are legends concerning both these details, one the tale of the greyhound being believed to have murdered a child when, in fact, it was trying to save it from a serpent. It was killed for this but commemorated here when the truth was realised).
Two effigies of females in the north chapel are notable: Eva de Braose is represented in a mid-13th century sandstone memorial, wearing a wimple and holding a heart which suggests a “heart only” burial. A large armorial shield covers much of her body which was unusual for a woman; her dress falls in stiff folds and a hound lies at her feet. Nearby is the small figure of a Hastings lady with long crimped hair: her hands are not in a pose of devotion but holding some lost object which might have been a squirrel on the chain dangling from one hand and disappearing into her pocket. The story goes that she fell to her death chasing this pet animal probably on the castle walls.
Other effigies are: John, second Lord Hastings, according to Pevsner, “exquisitely carved and characterised knight in armour, his legs elegantly crossed, his feet resting on a (sadly headless) lion”; Dr David Lewis in cap and fur-trimmed robe, the head resting on cushion and book and a huge St. Christopher, carved from a single piece of wood, with a long beard and flowing hair.

If you enjoyed this article read more History on the buses – in Monmouthshire and beyond, or click here to see more Abergavenny History articles.