It’s a Saturday morning, and I’ve woken up in an extremely rained-upon tent. Sometime in the previous evening I obtained a child’s princess balloon. I can hear someone playing the ukulele nearby. 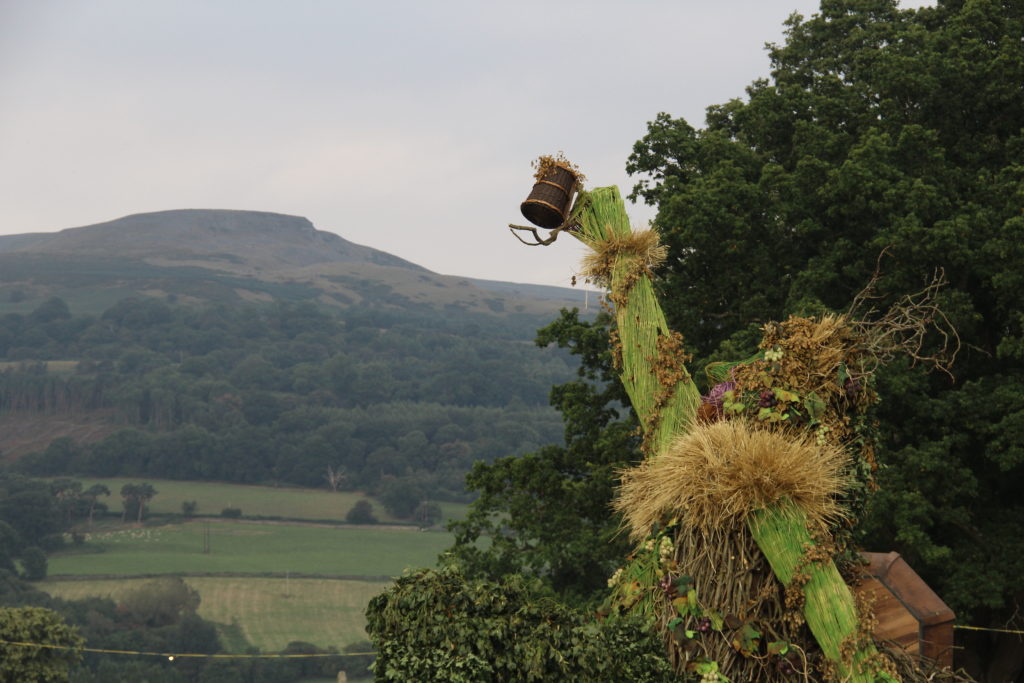 Now in its 14th year, Green Man festival kicked off in Glanusk Estate in Crickhowell from the 18th-21st August. This was my third time attending the festival – it was actually the first major festival I’d ever been to. In all honesty, this has made me spoiled, because I expect all festivals to be as enjoyable as Green Man. It manages to be family friendly without losing its cool, and to be ‘indie’ without being massively esoteric. Also, we locals take for granted the surrounding scenery of the Brecon Beacons, forests and River Usk, which is a major draw for those festival punters from less-green areas of the UK.

The AN team arrived on Thursday evening, and I was keen to catch some of Flamingods’ set on the Far Out stage, as I’d seen them play an exuberantly tropical (and poorly attended) set on the same stage few years ago. Their sound seems to have mellowed in the last couple of years. I rather liked the more uptemo stuff, but it was still nice to see a bigger crowd there for them. Wild Beasts drew a huge crowd, so much so that we couldn’t get into the tent, but their dreamy indie rock seemed to please those who could.

The best part about Thursday was discovering a field of swaying, glowing lights near the cinema tent.

These little touches are exactly what make Green Man feel like something really special. The site is decorated with bunting, flags, sculptures and wandering performers, and it’s always easy to find a shady (though not always dry) spot to chill out if you’re not a huge fan of crowds. Being someone who doesn’t eat meat, I always appreciate the many veggie and vegan options, and fans of craft beers and cider will be spoiled for choice at the specialised bars dotted around the site.

On Friday, we could not grace the festival with our presence until the evening. Wesley Gonzalez, ex-frontman of pop-punk band Let’s Wrestle, played on the Walled Garden stage, with a charismatically delivered solo set. We also caught some of James Blakes’ subdued electronica on the Mountain Stage too. He seems like one of the few properly ‘mainstream’ acts that I’ve seen at Green Man, but I think it crossed over perfectly. 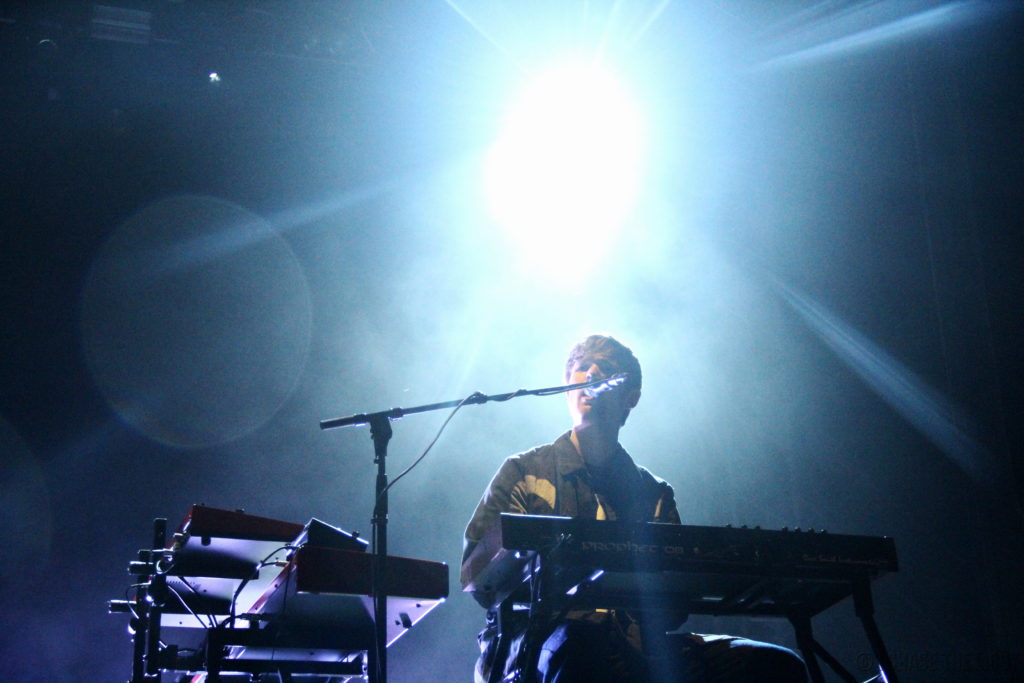 Speaking of pop – later on in the Walled Garden was ‘Charlotte Church’s Pop Dungeon’, fresh from Glastonbury and Stewart Lee’s ATP festival (where at both, many people agreed she upstaged a lot of the “proper” bands). She sang everything from Amerie’s seminal pop banger ‘One Thing’, to En Vogue, to Nine Inch Nails, clad in holographic sequins and sipping champagne, and accompanied by a full band who were all dressed in wacky costumes. It was less ‘drunken karaoke’, more high performance art, and it was so much fun to watch. 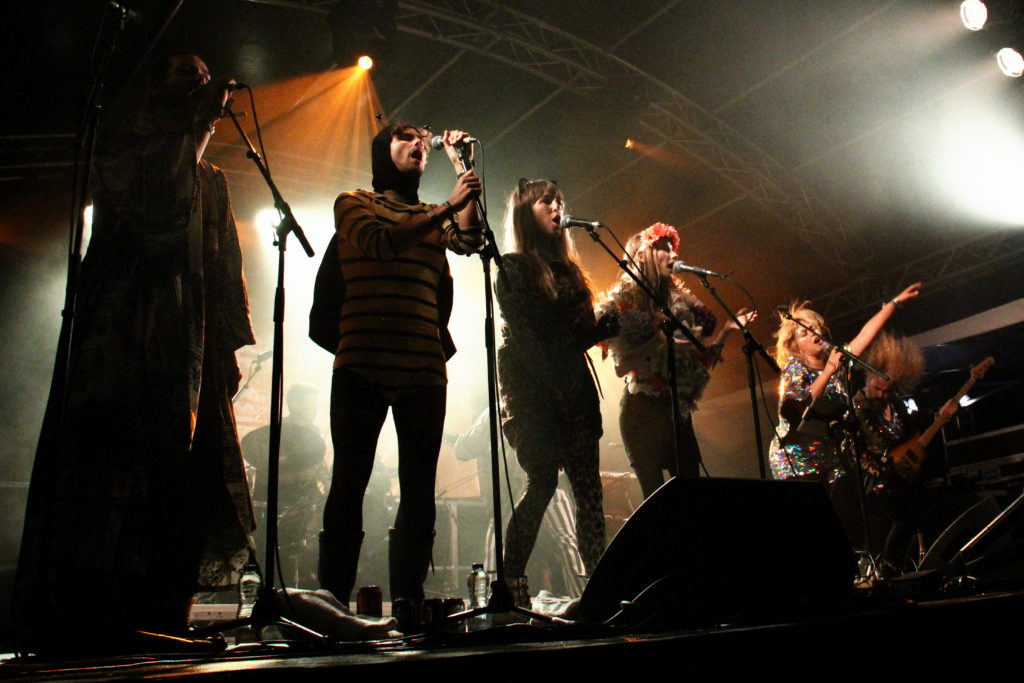 On Saturday, glacial sibling trio I See Rivers were soothing enough to calm even the most gripping of hangovers. At lunchtime I wandered down to the Far Out tent where I caught the end of a phenomenal set by post-punk 4 piece Fews. 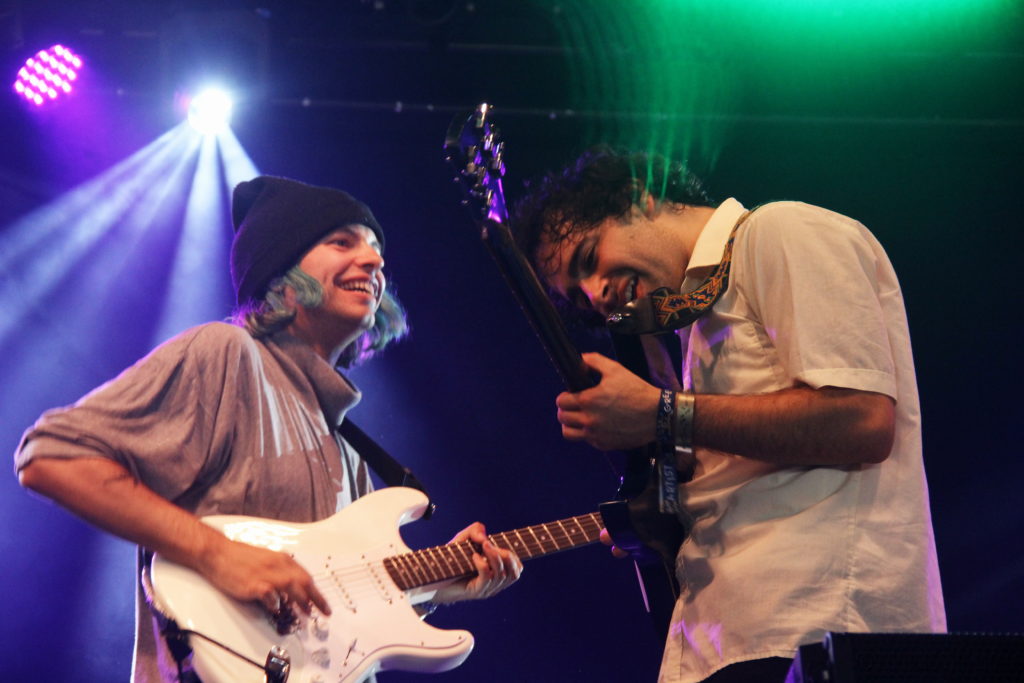 The band, hailing from Sweden, America and the UK, have just released a critically acclaimed album ‘Means’, and are doing a headline UK tour, as well as supporting the Pixies, later this year. I’d highly recommend going to see them, because they’re incredible live – ferociously energetic and furious, the kind of band that reminds you why bands still actually play live nowadays. I actually stopped taking photos because I was so entranced.

I also caught Cardiffians Inc.A in Chai Wallahs. Dressed in army uniforms and chainmail, they got the crowd moving with a set of Balkan-flavoured world folk.

In previous years I’ve spent a lot more time in the Last Laugh tent, but this year it was usually packed with people trying to get out of the rain, which meant you couldn’t easily get a seat. I did catch John Shuttleworth. His quick-fire puns were pretty funny, although the best bit was when he got the audience out of their seats for a Simon-Says-esque game that got increasingly ridiculous – “Pick your child up! Now, put your child down in a different area!”

The only other comedian I saw was Daniel Simonsen on Sunday who was pretty funny, although I couldn’t help but cringe at some of his bluer jokes considering I could see numerous kids in the tent. 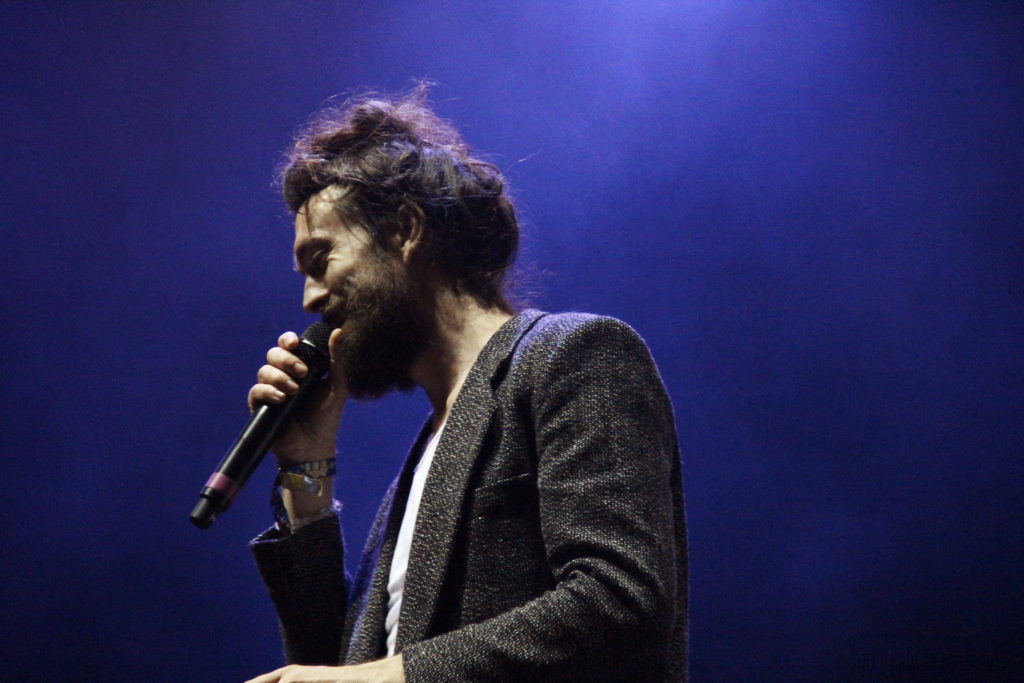 Edward Sharpe headlined the Mountain Stage on Saturday night and was warmly received by the crowd. Mr Sharpe chatted with the crowd, told stories, facilitated sing-a-longs, and at one point there was a crowd proposal (she said ‘about b****y time, yes!’).

I then legged it over to see Jagwar Ma in Far Out. I was a bit underwhelmed, which surprised me as I’m quite into dance/electro, but I wasn’t in a very good place to actually see them.

I popped over to Chai Wallahs again and saw aptly named reggae/dance/ska fusion group They Say Jump, which perked me up again. Back over to Far Out to see Battles who were one of the highlights of my weekend. Obviously the crowd went mad for Atlas, and John Stanier was incredible to watch on the drums.

We managed to see a fair amount of bands between us on Sunday – Moonlandingz, The Besnard Lakes, Whitney, and Happy Meal LTD were all solid, but then I had a clash between Warpaint, who I know and enjoy, and Ezra Furman, who I’d heard great things about but never actually seen. I compromised, and saw half of Warpaint and then sprinted over to Far Out. I’m so glad I saw Ezra Furman’s full set, because it was one of the best live performances I’ve seen maybe ever. Furman’s band, The Boyfriends, helped him crank out rock n roll pop tunes, while Furman snarled and wailed his intricate and witty lyrics. 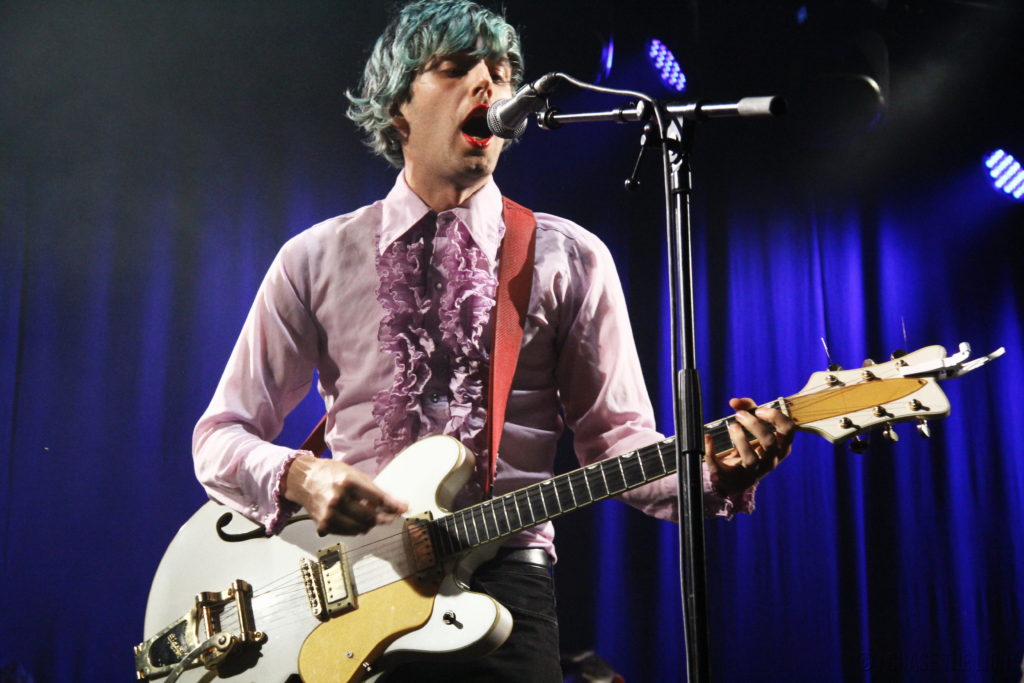 Belle and Sebastian closed off the performances on the Mountain Stage, with an amazing stage invasion during Boy With the Arab Strap: 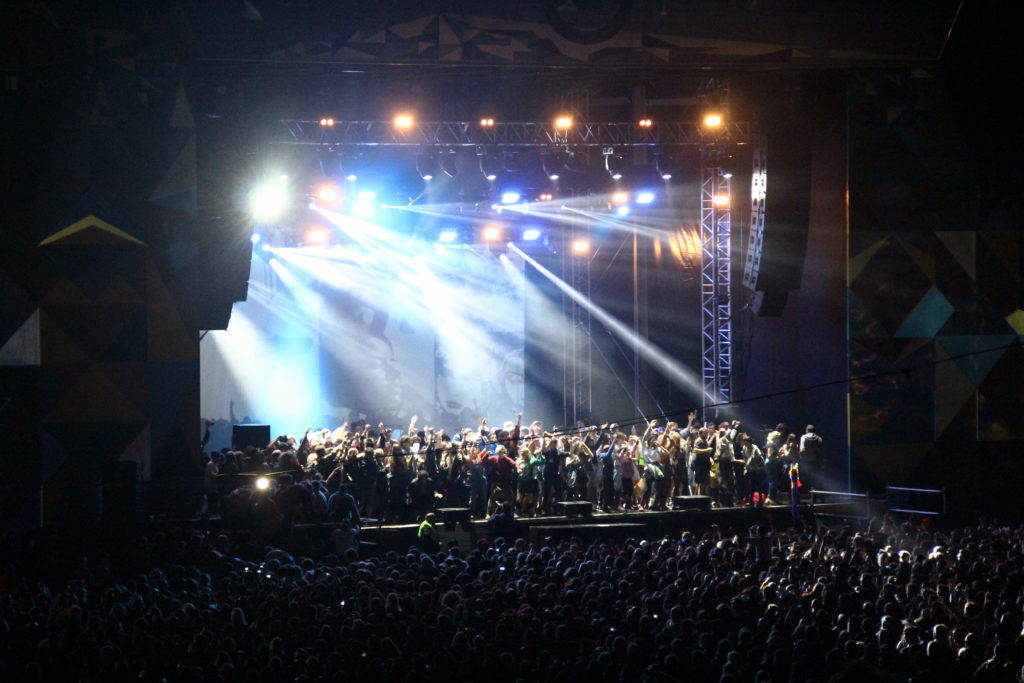 Before the burning of the Green Man fireworks officially brought the celebrations to an end (unless you were heading back to the bar/Pete Paphides’ DJ set). The one thing I would have liked would have been some music to accompany the fireworks, though logistically I can see how that might be problematic…! 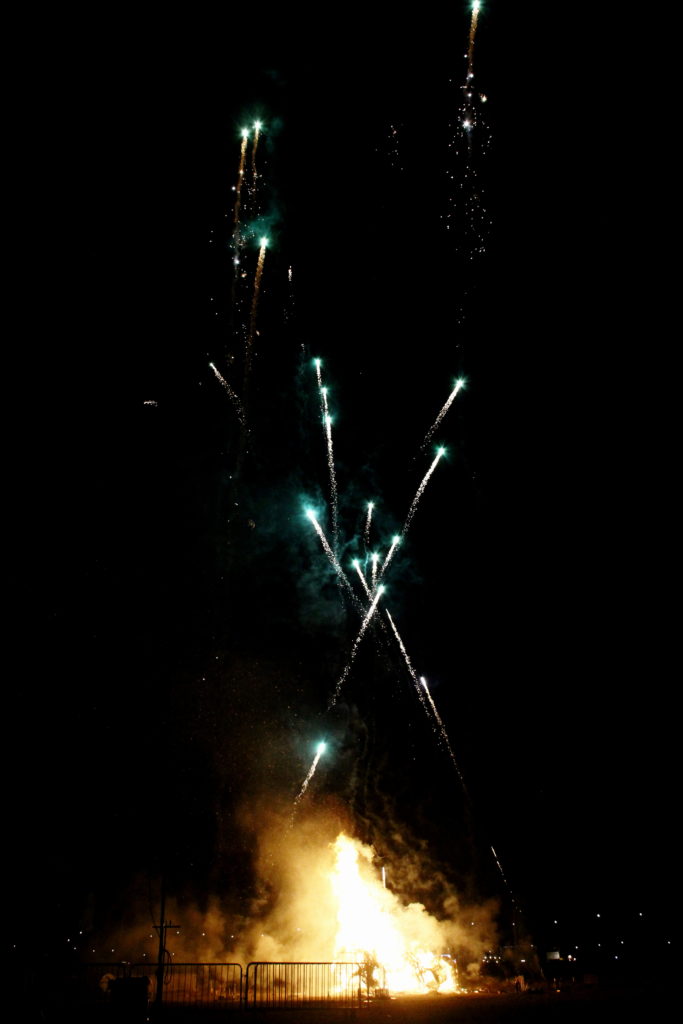 To me Green Man is one of the best festivals in the UK. It always introduces me to new music, which, after many student nights in Cardiff’s clubs, felt hugely refreshing. I could have done without so much bass playing late at night next to the campsite, but I suppose it’s only for a few nights (and the DJ backstage made up for it by playing Stromae, who would be my fantasy Green Man headliner at some point…  just a suggestion!).

I feel like I packed in more music than ever this year, and really enjoyed most of the bands I saw. I would have liked to have spent some more time at the Green Man Rising stage, or in the Last Laugh tent.

Overall, Green Man continues to be my favourite festival, and the fact that it’s only in Crickhowell is just a bonus.