Inside of a sold out Labour Club the local wrestling fans watched the first ever MCW event in Abergavenny! The action did not disappoint as the MCW stars put on a hard hitting, entertaining show which the fans could not get enough of.

The 5 matches displayed the talents, athleticism and charisma of the MCW roster with fast and furious action that brought the crowd to their feet! 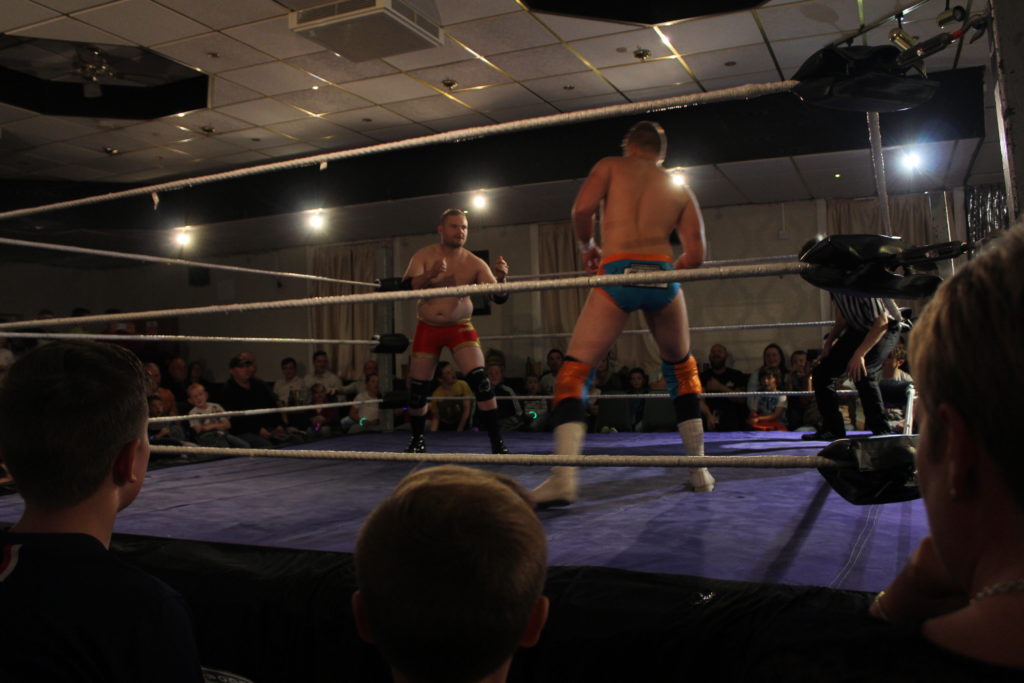 Danny Jones returned to MCW for the first time since the inaugural MCW show last year. He returned to square off with ‘The Gentleman’ Christopher Drew looking to get back to winning ways after he tasted defeat in his last match. Drew entered to a less than favourable reaction from the crowd as ‘The Gentleman’ took great pleasure in giving his unpopular views regarding the Welsh population on his way to the ring. As the bell rang it was the fans turn to give their opinion on Drew as the star took to the outside, thinking better of it than to lock up with the fan favourite Danny Jones. Jones led the Abergavenny crowd in a ‘chicken’ chant which incensed Drew to return to the ring. As quickly as he entered Drew was back out again but his top knot became his downfall as Jones’ quick thinking brought Drew to the apron and into the ring the hard way!

The crowd cheered as Jones hit a flurry of atomic drops and took the advantage early on in the bout. Drew showed his ability and strategy as some strong forearms allowed him to take the upper hand. Drew was able to use the 5 count to his full advantage and dominated Jones. Frustration grew for Drew as the resilience of Jones saw the fan favourite kick out of 3 near falls. The crowd rallied for Jones and with the support building, Jones took control. Jones raved his way back into the match hitting Drew with a running fist drop before hitting an AA for the 3 count! 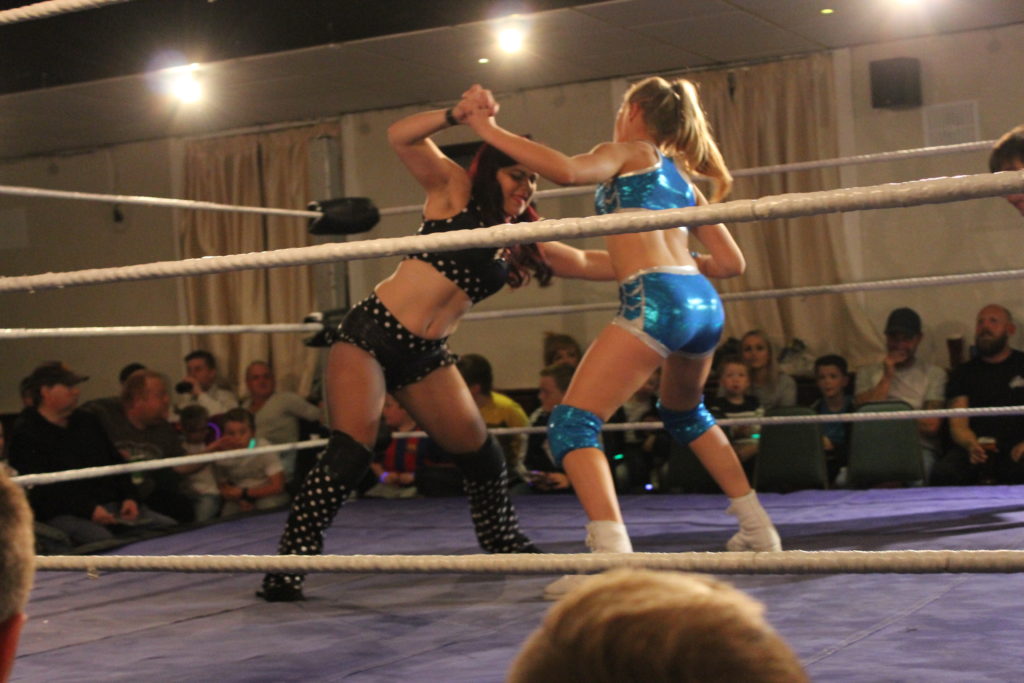 The second match of the evening was an MCW women’s match with the ‘Teenage sensation’ Millie Marx taking on the women from the ‘Land of Hope and Glory’ Katrina Von Kaige. The match began with both women locking up in the centre of the ring and showing off their technical abilities. Both women displayed their strength and speed trading the upper hand and exchanging some painful chops to the chest. Marx’s splash looked to give the youngster an advantage before a rake of the eyes from Von Kaige gave the ‘vintage villainess’ control of the match.

Von Kaige then took full advantage of the 5 count while punishing Marx on the ropes before showing just how lethal her knees are, first driving her knees into Marx chest after a cartwheel then driving both knees into Marx’s face. Marx kicked out at 2 and rallied with three shoulder charges to Von Kaige. Then the stars stood face to face and exchanged strong right hands, Von Kaige’s fine suplex could again only bring a 2 count and frustration was showing. Marx, with the crowd in her corner used that momentum and hit Von Kaige with a powerful belly to back suplex into a bridge, pin to pick up the 3 count and take home the spoils. 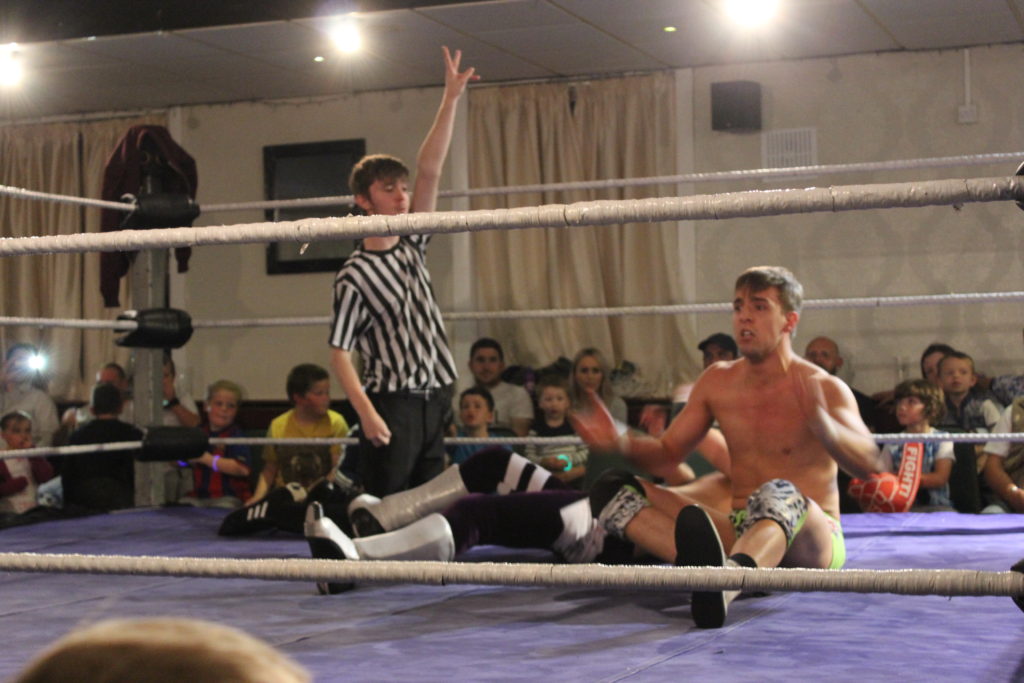 The man who personifies the steampunk look, Chris Custodio squared off with the most hated man in all of MCW, TJ Sky. After both stars exchanged shots a hurricanrana from Custodio saw the action spill outside the ring. Custodio took the upper hand and allowed the Abergavenny crowd to display their disdain for Sky. Custodio held Sky as members of the crowd and even the ring announcer had a shot at the most hated man in MCW. The action returned to the ring where Sky would ‘bare all’ as his tights were pulled down and the Abergavenny crowd received more than they paid for. Sky composed himself, pulled up his tights and fought back hard. Sky then targeted the fingers of Custodio before a wicked hurricanrana dropped Sky shoulder first into the ring post.

The battle continued and as Sky set up to finish the match a reversal from Custodio inadvertently led to Sky being driven into the referee. Custodio nailed a stunner and cross body but the incapacitated referee could not count to 3. Custodio checked on the ref and his concern cost him. Sky nailed Custodio with a blatant low blow and picked up the win. Sky may be the most hated man in MCW but it won’t matter too much to him after he picked up the victory. 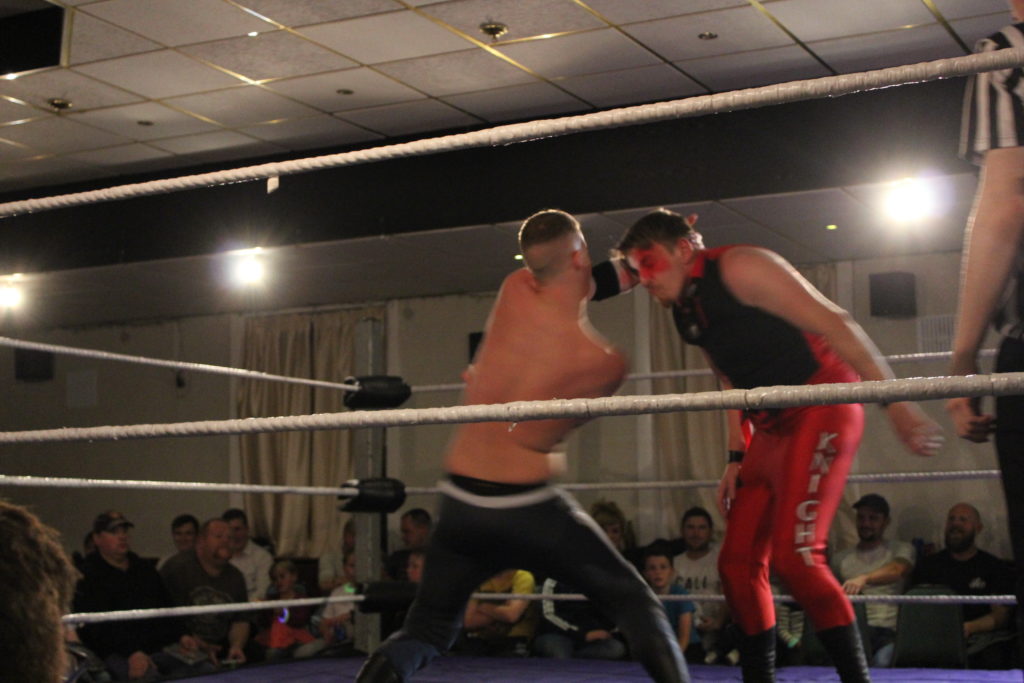 The fourth bout of the evening saw Sebastian Knight square off with Cwmbran’s own Beano. The original bad man was representing the NP44 and despite nursing an injured wrist stepped into the ring with the 10 year veteran Knight. Beano started the match by offering to shake the hand of Knight who obliged but remembered that this was a wrestling match and used this as an opportunity to take the upper hand. Knight’s aggressive start saw a brief fight back in the early stage by Beano. The Original Badman’s hand again came into play as Beano missed a chop and Knight and capitalised. The crowd had split with their support in this match and Beano rallied with a big European uppercut followed by a beautiful kick to the face.

The momentum in this match would not stay with one man as both stars continued to switch control. Knight came back into the bout firmly and exchanged chops with the NP44 resident. Beano again missed a chop further injuring his hand. Knight took full advantage of this and hit two big drop kicks to Beano. Knight was unsuccessful with his three which gave Beano an opening which he didn’t hesitate to take. A full Nelson bomb downed both wrestlers but when Beano attempted to take the upper hand Knight’s experience shone through as he hit a one knee face buster to the injured hand followed by swinging reverse STO.  With both men down the ref began his count reaching a count of 9 before the exhausted, determined stars managed to get to their feet. Beano managed to hit Knight with twisting neck breaker from the top rope to end one of the most competitive matches of the night. 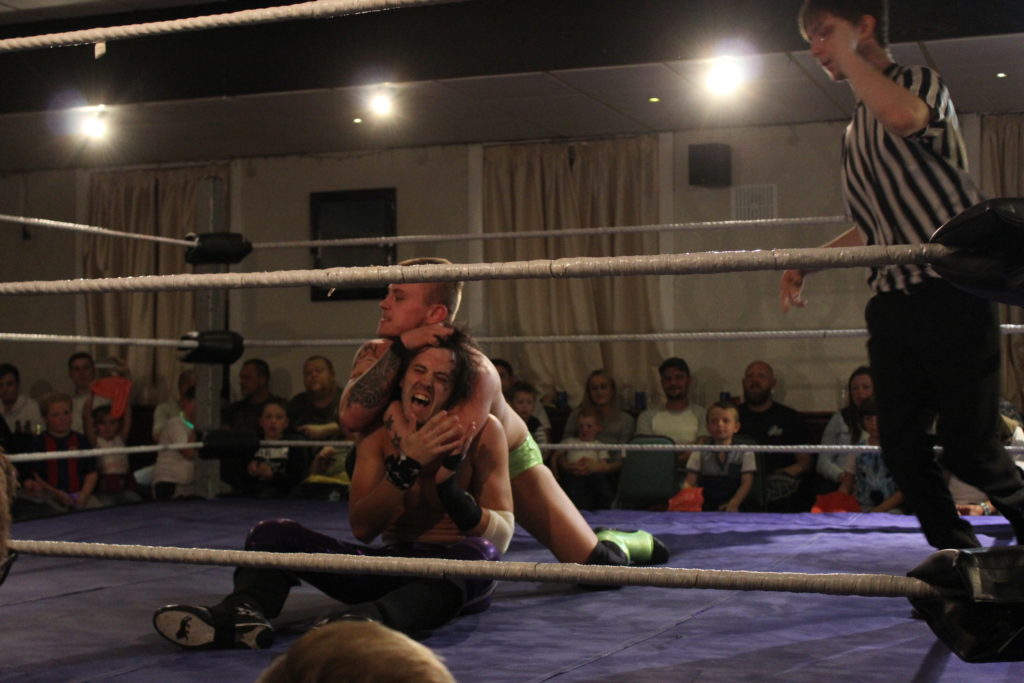 The first defence of his MCW championship saw Jacobs square off against the ‘hot shot.’ The highly anticipated main event saw both competitors brimming with confidence as they vied to take home the coveted MCW Championship.  ‘Hot Shot’ got the match underway with a vicious slap to the champion leading to an early fist fight. The brutality spilled to the outside where the environment was used as a weapon for each of the competitors. Jacobs drove the challenger head first into the merchandise table, as the match turned into a brawl. ‘Hot shot’ gladly returned the favour to Jacobs by driving champions head into the merchandise table. Looking to take control Scott attempted a big chop, the champion’s knowledge of the environment came into play as Scott’s chop missed and was driven hard into the turnbuckle. Both men were displaying just how much the championship meant to them as Scott rallied and downed the champion next to the time keeper’s stage. Scott then risked it all as he attempted a big elbow off the stage. Again Jacobs managed to roll away before showing off his swashbuckling offence. The champion hit the ring up momentum for a spectacular second rope suicide dive. The crowd in awe at what they had just witnessed were then left speechless as the champion, full of adrenaline, hit the ring again to perform the manoeuvre of the night. A summersault suicide dive downed both stars on the hard wooden floor.

Slowly both competitors crawled back into the ring where Jacobs somehow found a second wind, a vicious enziguri and Pele kick had the crowd on their feet, but ‘HotShot’ proved he deserved his shot at the championship as he mustered all his strength to get his shoulder up at 2 and a half. Attempting to get back into the match Scott hit a couple of big elbows to the champion before missing a back stabber and tasting a big knee. An opportunity opened up for the confident Joey Scott as a big neck breaker downed the champion; Scott took this opportunity to show off his athleticism and mocked the champion with some impressive push ups. This however showed off the inexperience of the challenger who failed to capitalise, managing only a 2 count on the champion. Jacobs bravely fought back and both men were soon down in the centre of the ring. With the referee counting and the fans shouting encouragement to not see this incredible spectacle end with a draw, both competitors made it to their knees and began striking each other back and forth.  Jacobs stared the challenger in the eye and delivered a double flip off, showing the champions determination and desire to not give in. Scott then pulled out all the stops hitting a running bicycle kick, super kick and DDT. The crowd held their breath as the referee brought his hand down for the 3 count but before he could hit the mat, Jacobs kicked out. Stunned, Scott‘s frustration showed, he grabbed the MCW belt and was readying to knock Jacobs into next week. The crowd were not left with a disappointing finish though as the superb reaction of the referee saw the belt taken from Scott and removed from the ring. With Scott stunned at the official it was Jacobs opportunity and he duly accepted it. A vicious piledriver downed ‘Hot Shot’ and ensured that Jacobs’s first title defence was successful. The Abergavenny crowd cheered realising that they had seen a special match put on by 2 fantastic competitors and it brought the curtain down on an extremely successful first show in the town.

The first MCW show in Abergavenny could not have gone better for both the company and the fans. The sell-out crowd were given the opportunity to see the talented local roster MCW possesses and MCW was able to chalk up their visit to Abergavenny as a resounding success. MCW will be putting on more shows in the future and for more details you can ‘like’ their page on Facebook at MCW-Monmouthshire Championship Wrestling or follow them on Twitter @MCWpro.