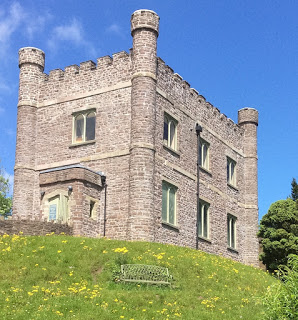 William de Braoze
This sunny view of the castle belies the terrible massacre of 1175 when William invited Seisyll and followers for Christmas and then slaughtered them. This treacherous act does not stand alone: I have told its particular story in another post linked lower down. Here is some background.
Modern historians seem to fight shy of discussing William’s character and so one must look further back for enlightenment. The ancestral home of the de Braoze family was in Normandy but their chief English fief was Bramber in Sussex.

The Marcher Lords were put in power after the Conquest to keep order in that part of Wales and William, 4th Lord of Bramber, acquired great estates. Some came by marriage around 1166 to the heiress, Moll Wallbee or Maud de St. Valérie, a “prudent and chaste woman” who, according to legend, built Abergavenny Castle in one night, carrying the stones in her apron. Through her he obtained Brecknock and Overwent. He also became Lord of Limerick, Gower, Hay, Radnor, Builth, Kington, Painscastle and of the Three Castles in 1203 and 1205 and so was hugely powerful. Maud defended Painscastle against a massive Welsh attack – she seems to have been quite a heroine! King John granted William the right to to conquer Welsh territories, a massive bonus for him.

In 1208, William lost the friendship of King John, whose court favourite he had been, for a reason not fully understood but it is possible that Maud made comments about the murder of the king’s nephew, Arthur of Brittany. William owed the king the large amount of 5000 marks and was asked to send his son, William, (one of 16 children reputedly) as hostage. It seems that Maud may have refused by stating within earshot of the officers that she would not “deliver her children to a king who had murdered his own nephew.” John led troops to the Welsh border and seized all the castles belonging to William de Braoze. He and his family fled to Ireland but his wife and eldest son were captured and starved to death at Corfe Castle (or possibly Windsor) whilst he escaped to France, dying on the 9th August 1211: he is buried at the Abbey of St. Victor, Paris.

From the Wallace Collection

The man himself
William was called “the Ogre of Abergavenny” by the Welsh although Geraldus Cambrensis in the last half of the 12th century is lenient on the subject of the massacre, absolving William from the responsibility of being its instigator. He claimed that William was tossed into the moat at its deepest point when the murder squads were running beserk and was rescued by divine intervention alive and completely unharmed. Geraldus blames Henry II for agreeing to the act of treachery and giving the order for it to be carried out.

It was said by Geraldus of William that he would pause a conversation if he saw a cross or a church, pray and then resume the talk and that he tended to overload “or perhaps I should say honour” his letters with words referring to God so that they became “quite boring not only to his scribes but also to the recipients when they had the letters read aloud to them”. A little touch of honesty! Perhaps one could say that William was a sanctimonious hypocrite but he was also a benefactor of the priories of Brecon and Abergavenny.

Whilst in no way wishing to whitewash him, I feel that one must judge him against the violence of other periods where men were put on the rack, hanged, drawn and quartered or burned alive at the stake. I found one record of his torturing a man but, remember: 200 Catholics (123 priests) suffered death in the reign of Elizabeth I; 300 Protestant martyrs during Mary’s and 308 were executed by Henry VIII as a result of the Treason Act of 1534. Many of these deaths were of unbelievable cruelty. Before that there was the Harrying of the North (of which the Conqueror might have repented) and the terrible death of Edward II.

Means of Warfare
Again, Geraldus is eloquent on the means by which the Welsh made war, pointing out that the men of Gwent were more skilled with the bow and arrow than those from elsewhere. In the capture of Abergavenny Castle later by Seisyll the son of Eudas, 2 men-at-arms were rushing across a bridge to take refuge in the tower on its mound of earth. The Welsh shot at them from behind and the arrows actually penetrated the oak doorway. This attack was in revenge for the massacre and the walls were scaled by ladders so that the castle could be occupied and burned down. It was then rebuilt of Old Red Sandstone.

William de Braoze testified that one of his men-at-arms was struck by a Welsh arrow which went right through the top of his thigh where it was protected outside and inside by iron “cuishes”, and then through the leather skirt of his tunic, into the saddle and finally lodged in his horse, killing it. Another man was swiftly hit on both sides as he turned his mount in a half-circle. These bows, says Geraldus, were carved from dwarf elm-trees in the forest and left rough and unpolished, not capable of long distance shooting but powerful enough to inflict serious wounds in a close fight. They were an early harbinger of victory at Agincourt. 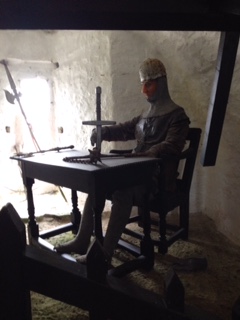 Giraldus in Manorbier castle, his birthplace.

You can read my account of the infamous massacre by clicking here.