I am writing this on what is a typical meteorological memory, a wet Sunday. Growing up do I recall many a Sunday when the weather was its usual spoiler? Quite probably. In fitter days I used to run, 70-100 miles per week, come rain or shine as they say. I loved nothing better than to face extreme elements on a long Sunday run, followed by a hot bath, hot food and an afternoon of pleasant recovery as my body did its miraculous unbidden work of rejuvenation.

Of course, the topic of what we cannot change, weather, death, fate, some would attest (not me) drip feeds us with fascination; it’s part of the explanation why we like to talk about it so much. Aside from the ease of discourse which weather permits us to make pleasant chatter with our fellow man (or woman), it is a source of near-endless speculation and for good reason. Our best laid plans are often scuppered despite the morsel of contingency we adopt to beat back weather’s capriciousness. It is arguably the most pervasive of subjects to grace our media-saturated lives: floods in Japan, hailstones the size of tennis balls in Texas, hurricanes and storms as common as a tautology from the mouth of Donald Trump. Weathermen and women have a celebrity spot in our hearts you may well have noticed; with real conviction or not we pray that next Tuesday’s weather will be good. On a daily basis I, like many I suppose, throw back the curtains to moan or rejoice at what the sky has in store. As my day unfolds, driving along the lanes, I fall into a kind of odd, alert meditation of what the weather is doing to the landscape, especially now when the seasons begin to overlap. I actually find myself fixated to the tops of the hedges as if looking for some peculiarity, their shorn image similar to lay lines directing the sky to who knows where; a directional flow one can chart. Maybe I’m waiting for something to fly over them, hurrying by on a gust of wind? Or that I can judge the sky fairer or fouler from the shaved top of the hedge? Strange.

With the recent high winds trees, branches and leaves litter everywhere and one cannot help to fondly invoke the words of the English evangelical preacher John Bradford when driving under a huge oak being whipped mercilessly by the wind: ‘There but for the Grace of God, goes John Bradford.’ This wide-eyed disaster-in-waiting on an ordinary journey is, though, hardly worth a snifter of contemplation. Still, driving up the A465 a few days ago a silver car parked opposite Abergavenny Train Station was if not exactly crushed then certainly damaged by a fallen tree. No doubt a phone call was made in haste to the owner and then he or she went through the same
thought process: What if I had been in the car? It begs one to reconsider, to say the very least. Parking my car an hour or so later at St Peter’s Church in Rowlstone, I looked up to see what was creaking above me. Ah, nothing more than my old bones.

As a lover of history, I often wonder what part weather played in the lives of people living hundreds of years ago. Obviously a level or hardship unknown to us now with our Gor-tex jackets, central heating and hyper-efficient insulated homes. Reading the tranche (to keep it medieval) of nature writing these days or even memoirs and diaries one cannot help notice the backdrop to every utterance, why, what else but the weather. Again, for good reason: it affects mood and a long list of other things we often forget. It was not always the case, or so it appears. What we know of records, journals, diaries etc. from the middle-ages scant reference was made to the weather. Perhaps this was because they had a more nonchalant and accepting view of weather’s inevitability whereas we
are confronted nowadays with man’s superiority to ultimately tame everything given sufficient length of time. There is no doubt we know a great deal more about weather systems than ever before. But it was that dependable chronicler Samuel Pepys who was more akin to us in his reflections, writing on Boxing Day 1661 that, ‘It was most foul weather…and so we went into an alehouse.’ I’ve heard worse ideas.

The splendid diaries of the late Derek Jarman, Smiling in Slow Motion too prove great reading if one has a literary weathervane dictating one’s sensibilities. Jarman lived in Dungeness, that arrowhead of bare land on the Kent coast sticking out into the English Channel. The sheer rawness of weather systems sweeping off the sea in that area can buckle the knees and blitzkrieg the most hardiest of flora. As Jarman lay helpless in the last months of his life dying from AIDS his partner brought to his hospital bedside a collection of seventeen-century poetry. On the 29th November 1992 Jarman notes from his bed, overhung by six buzzing fluorescent lights and no natural light whatsoever something Donne wrote, ‘Busy old foole unruly sunne, Why dost thou thus through windowes and through curtaines call on us?’

Donne’s busy old foole will not be around that much as darker nights are just round the corner. Before then there is much to see and to glory in though and, a tinge of melancholy too that for me and maybe others is a mark of this season: I wish I could go back to one of those long, wet runs on a Sunday and, today, by closing my eyes I can almost hear each foot as it lightly sped across the land with the fleetness of my youth. Yeats as he often does, tracks the apposite emotion:

The woods were round them, and the yellow leaves
Fell like faint meteors in the gloom, and once
A rabbit old and lame limped down the path;
Autumn was over him… 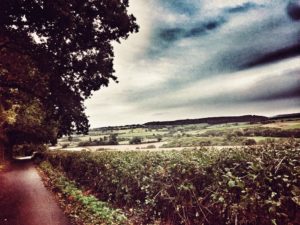