Tonight, both the Monmouthshire and District National Eisteddfod’s Crown and Chair were presented to the festival’s Executive Committee, at a special ceremony in Monmouth.

This year’s Crown is presented by Cymreigyddion Y Fenni (the Abergavenny Welsh Society), and the Crown has been created and designed by local artist, Deborah Edwards.  The financial prize has been donated by Alun Griffiths (Contractors) Ltd.

The Crown is presented for a collection of poems not in full cynghanedd (strict metre) of up to 250 lines, titled ‘Llwybrau’ (Paths).  The adjudicators are Siân Northey, Menna Elfyn, and Einir Jones.

The inspiration for the design of this year’s National Eisteddfod crown came from the artist, Deborah Edwards’ love of living in Monmouthshire, celebrating the county’s beautiful landscape, wealth of architectural landmarks and cultural heritage. The crown is made up of a series of windows, the outline shape of which was taken  from the Nave’s West Window at Tintern Abbey.  Each window frames a different view of Monmouthshire, which include the castles of Abergavenny, Raglan, Caldicot, Usk and Chepstow, Abergavenny Market Hall, the Severn Bridge, Monnow Bridge and Llancayo Windmill.

Lady Llanover, a patron of Welsh culture locally, is represented in the design, as are the peaks of the Skirrid, Sugarloaf and Blorenge and many other elements important in the history and landscape of Monmouthshire.

Each window shaped section has two layers; the first layer is solid sheet with details pierced out by hand using a piercing saw. The second layer is made up of line drawings formed in square section silver wire.  The textile for the crown was woven by Sioni Rhys Handweavers in their Pandy studio, using a traditional local weave. 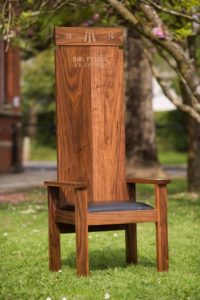 The Chair will also be presented to the Executive Committee on Tuesday evening.  This year’s task is to compose a sequence of poems in full cynghanedd of up to 250 lines titled ‘Ffiniau’ (Borders / Boundaries).  The adjudicators are Tudur Dylan Jones, Cathryn Charnell-White and Meirion MacIntyre Huws.

This year marks fifty years since Dic Jones won the Chair at the Aberafan Eisteddfod for his ode, ‘Y Cynhaeaf’ (The Harvest), and to note this important anniversary, the Chair is given by the family in the poet’s memory.  The financial prize is donated in memory of Islwyn Jones, Wenvoe, Cardiff.

Emyr Garnon James, Head of Design and Technology at Ysgol Uwchradd Aberteifi, who used to visit Yr Hendre, Dic Jones’ family home, was chosen by the family to design and create this year’s Chair.

Emyr says, “I used to call at Yr Hendre, and the Aberafan Eisteddfod Chair was in the corner of the room.  I never imagined that I would be chosen to create an Eisteddfod Chair in memory of Dic himself.  It has been an honour and a pleasure to create this Chair, and I thank the family for the opportunity.

“One thing was certain from the start when speaking to the family, it had to be a ‘no-fuss’ Chair, the wood being the main attraction.  I returned to Yr Hendre to see the 1966 Chair, which was a very modern Chair in its day, a simple Chair with beautiful wood.  I chose to work with black walnut, and created a simple design with straight lines, a design which would, hopefully, have been appreciated by Dic himself.

“Working with the black walnut has been a special experience, and I have learnt how to cast bronze into the wood to create the inscription and the Nod Cyfrin (Gorsedd of the Bards symbol).  I may well use some of these techniques in future projects with pupils at school, after exploring different ways of working when creating the Chair.”

“We also thank Emyr Garnon James for his work on the Chair, and the families of Dic Jones and Islwyn Jones for their donations.  I thank you on behalf of the Committee, the Eisteddfod and the whole of Monmouthshire.”

The Crowning ceremony takes place on Monday 1 August at 16.30, and Chairing ceremony on Friday 5 August at 16:30.  Anyone wishing to attend the ceremonies should ensure they have a reserved seat ticket as the Pavilion will be very full.