Further to our previous article, we caught up with Daniel Morden, an acclaimed storyteller, writer and performer. Tomorrow night at the Borough Theatre will host a ‘homecoming’ performance of his newest production ‘Stolen’ – a fantastical production combining traditional storytelling and musical accompaniment from Sarah Moody and Oliver Wilson-Dickson. 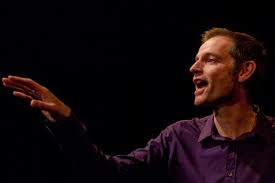 Daniel was kind enough to take time out of an extremely busy UK tour to have a chat with us about his new show, his inspirations, and life as one of the UK’s most prominent storytelling artists.

I tell stories all over the world. It is great to have the chance to perform in Abergavenny, but I’d be lying if I didn’t admit the stakes are higher. It is one thing to mess up a show in Stockport – you can drive away afterwards, swearing never to return – but you can’t do that in your home town! Thankfully, I’ve already performed the show in nine venues across England, so I am confident people will enjoy it.
I like to perform in Aber because I want young people to see that it is possible to live here and make a living doing something out-of-the-ordinary like storytelling. It means if I can do it, so can they.

It is great to live in a place where the mountains are taller than the buildings. That feels proper to me. When I was a child my Dad told us that King Arthur slept under a hill nearby, and would emerge one day to save Wales from danger. From an early age I had the sense that stories were lurking just beneath the surface of the landscape, waiting to be woken. Our history, our culture – the stories we tell ourselves about ourselves – influence how we live, our aspirations. I don’t agree with RS Thomas when he wrote that the Welsh are, (I quote):
“In impotent people

Worrying the carcass of an old song”.

I think the best is yet to come for the Welsh. I believe we are full of creative potential. My storytelling is an attempt to encourage that potential.

Where to start? Lots of adventures. Recently I performed a show to an audience in America via my phone. When an audience is with you, you can feel it. And strange to say, even though they were half a world away, I could feel it! My mind boggles at the implications!.

I told stories in hospices recently. That was inspiring and humbling.
I also went to Haiti in 2000 through a charity. I worked in rural schools, telling and collecting stories. The children I met had no books: they still told stories every day in the way we must have hundreds of years ago. They were amazingly talented and animated. They put me in the shade!

I am an old punk. I love the low-tech simplicity of it. All you need to make it work is silence and a willing audience, which means I am answerable to funders or employers. I don’t have to compromise when I choose the stories I tell.

It celebrates community. As I step out on stage I always feel a wave of gratitude to the audience, who have opted to come out to share an experience with me in person instead of staying in with Netflix.

It is mysterious – everyone imagines their own story, because the pictures are in the mind’s eye, not on the stage.

We communicate so much non-verbally, but you can’t put your intonation on the page.  So, I must describe more in my writing than I do in my storytelling.

I like the ‘don’t’s. Don’t open that door, don’t look behind you, don’t eat from that tree, don’t stray from the path…there are many others.

They provide tension. As soon as we hear a ‘don’t’, we know it is only a matter of time before the central character does the thing they have been told not to do. Then what? Trials and tribulations, which is what a good story needs.

‘Stolen’ is on at the Borough Theatre on Friday 10th November. Tickets are still available here.