The Tithe Barn in Abergavenny is little known outside the town but I was interested in visiting it ever since my recall of the spirited harvest song in Dryden’s opera of King Arthur:

“We’ve cheated the parson, we’ll cheat him again,
For why should a blockhead have one in ten?”

They were dodging the enforced payment of ten per cent of their wealth to the support of the village priest who was exempt and they seem to have managed this without off­shore tax havens! The tax could be paid in agricultural produce which was stored in a barn near a church such as this one, close to St Mary’s, built in the 13th century.

The building fell into disrepair until, in 1948, the parish sold it for £400 and it was used as a carpet shop, a store, a theatre and a discotheque. Then, in the 1990’s, the Church saw its potential as a community asset and took 4 years to restore it with care and authenticity: the roof struts are particularly fine.

It now houses a museum, an interactive learning centre, models in historic costume, a shop with inexpensive souvenirs and a cafe. Perhaps the most impressive exhibit is the huge 24 feet wide tapestry which celebrates the history and geography of Abergavenny, presenting such figures as St. Benedict, Owain Glyndwr who sacked the town in 1404, Sir Harry Llewellyn whose horse Foxhunter won the Olympic gold medal in 1957 (the horse is buried on the Blorenge nearby) and a tribute to the medieval statue of the Jesse tree in the church. Nevill Hall hospital is screened by foliage as it was not considered aesthetically pleasing!

When I went I was lucky to catch a lecture by an enthusiastic lady who explained that the task took 3 years and 10 months to complete, worked on by 60 local volunteers who toiled with humour and dedication several hours a day most days of the week and used 400 colours in special stitching to give a 3D effect.

Of course I needed refreshments after that and had cawl and cake in the cafe ­- delicious. Then I waddled off to the marvellous Grass Routes service to take me back to Usk where I have been encouraging people to visit as I do on my blog. Barbara Daniels.

If you’re interested in visiting The Tithe Barn they are currently open Mon-Sat 9am-4pm, for more information check out their site! 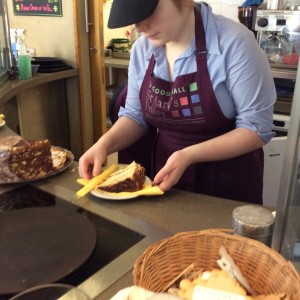