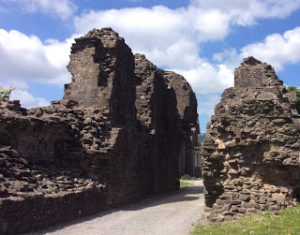 As you enter these gates to Abergavenny Castle you are probably planning to gaze at the walls and remaining buildings, take some photos and eat your packed lunch on the grass or seats provided. The grounds are green, tended and peaceful with stunning views of the Blorenge Mountain.

Yet you might wonder what Giraldus Cambriensis referred to in the Middle Ages when he refused to relate some terrifying atrocities that happened here: “lest they serve to encourage other equally infamous men.”

The background
Giraldus was almost certainly thinking of the massacre of 1175 about one hundred years after the construction of the castle circa 1087 by Hamelin de Balun, a Norman lord. The story starts with the killing in the 1160’s of Henry Fitzmiles, the 3rd son of the Earl of Hereford, by Seisyll ap Dyfawal, (aka Sytsyll ap Dyferwald) the most important Welsh chieftain in the area. Seisyll had previously captured the castle. The contemporary owner of the castle, William de Braose, determined on revenge for the murder, although it is difficult to see why as he benefited from the death of his uncle Henry, inheriting de Balun lands and the castle. itself.
Perhaps he wanted to eliminate Welsh factions at a stroke – but he only succeeded in perpetuating the violence.
Blood and Retribution
At Christmas 1175 de Braose invited Seisyll, his son Geoffrey and all the leading chieftains of Powys for a visit, supposedly of reconciliation and harmony. They accepted and, according to custom, laid down their arms once inside their host’s premises. They were instantly set upon and slaughtered in an act of treachery and brutality. The Normans then went to the Welshman’s home, destroyed it and, when they found his 7 year old son, Cadwaladr, cuddled in his mother’s arms, they cut him down too.
Yet in 1182 Hywel ap Iowerth of Caerleon and other kinsmen of Seisyll captured the castle again using scaling ladders and burned the place down. As William Camden, an antiquarian, said in the 16th century this castle: “… has been oftner stain’d with the infamy of treachery, than any other castle in Wales.”
The Context – not for the squeamish!
These events may have seemed to some unusual or even unique but the 12th century was a time of extreme violence. Unlike the Romans who spread their empire with some successful attempts at Romanising the conquered people, the Normans tried to subdue their captured territory by force. This cruelty was common also amongst the Welsh warlords themselves. In the rivalries men were blinded so that they could not be effective military leaders and castrated so that they could not bear heirs.
Nowadays
As you have seen, I have rushed in where the cautious Gerald of Wales feared to tread. I am sure I have not incited you to storm the castle walls! Now, on the very spot where once those semi-sacred bonds between host and guest were mercilessly broken, you will have an interesting visit. You can eat your simple or lavish picnic in the grounds and enjoy a warm – and genuine – welcome in the Museum, and in the town generally.  The beautiful Linda Vista gardens are quite near for relaxation. More historical interest is to be found in the Tithe Barn, with its excellent CAKE opportunities, located in the centre of Abergavenny. The medieval effigies in St Mary’s Church are fascinating. All are a short walk from the bus station. 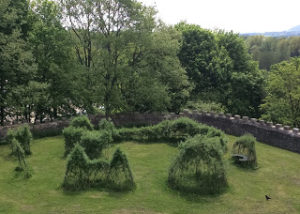