Wales’ largest music festival, Green Man, is delighted to today announce the first details of this year’s festival, returning once again in the epic surroundings of the Black Mountains deep in the heart of the Brecon Beacons for its 17th year.

Tickets are on general sale now, with early bird tickets having sold out in record time. Last year’s Green Man sold out quicker than ever, so we recommend not delaying and picking them up as soon as possible! For those looking for the full Green Man experience, the Settler’s Pass is available, which turns the festival into a week-long holiday, allowing early access to the site from Tuesday 13th August, and including workshops, music, discounts on local heritage sites, galleries, castles and more.

The magic of Green Man lies not just in its scenery and music. Made up of 10 individual areas, the festival also offers a diverse range of events to accompany its incredible line-up, boasting art installations spread throughout the tranquil valley, a beer and cider tent to enjoy a crisp Welsh pint, an outer-spaced themed area of discovery and exploration for the ‘little folk’ and a relaxation and workshop space for the teenagers. As well as a line up of science, film, comedy & literature that will be revealed in the coming months.

On this year’s bill, headliner Four Tet will take to the Green Man stage for a third time with a UK festival exclusive live set of carefully curated dance tracks. Ten years on from his last appearance at Green Man, Four Tet has released five acclaimed albums, collaborated with Burial, and remixed an array of other artist’s work including Floating Points – one of last year’s highlights.

“It’s great to be doing the Saturday night Mountain Stage slot at Green Man 2019!” says Four Tet. “I first played Green Man in 2004 and have always had good times there.”

Another making a reappearance is Father John Misty who last graced the Green Man stage in 2015. The American singer-songwriter, who is best known for his critically acclaimed albums like I Love You, Honeybear and Pure Comedy, will inevitably wow crowds in what’s set to be an unforgettable headline performance.

Following the release of her wonderfully atmospheric album Remind Me Tomorrow, Green Man are excited to announce the return of Sharon Van Etten and her powerful storytelling for the first time since 2014. Also joining us are the iconic Stereolab, who will play highlights from their ten critically acclaimed albums at this year’s Green Man following a ten year hiatus. For the first time in their 20 year career, Green Man will also welcome Canadian indie-rock collective Broken Social Scene.

Formed in Bristol, IDLES will be making the short drive over the Severn Bridge for their debut Green Man appearance. The punk-rock band enjoyed an incredible 2018 following the release of their second album Joy as an Act of Resistance, which reached #5 in the UK Album Chart, #6 in The Guardian’s end of year list and was also named BBC Radio 6’s album of the year. Green Man are also delighted to welcome one of indie-rock’s biggest breakout bands of recent years, Car Seat Headrest, to the Brecon Beacons this year.

Welsh bands appearing at this year’s Green Man, include Gwenno who will be playing the Far Out stage. Her 2014 debut album, Y Dydd Olaf is 100% Welsh language. Raised with Welsh and Cornish as her first and second languages, Gwenno explores the creative possibilities of using these time-worn tongues. Welsh legend Meic Stevens will adorn the Mountain Stage with his music, achieving a timeless mysticism that perfectly suits the ancient hills and mountains encircling Green Man. Dubbed “the Welsh Dylan”, Meic has been a massive influence on home-grown bands such as Super Furry Animals and Gorky’s Zygotic Mynci and we are thrilled to have him at Green Man this year. Valleys guitarist Gwenifer Raymond harnesses the raw elements of American Old West music and makes them personal by adding her own intricate Welsh folk sound. She released her debut LP, You Never Were Much Of A Dancer, in 2018. Hopefully, she’ll do a bit of dancing in her first Green Man appearance on the Walled Garden stage this summer.

Also appearing in 2019, Amadou & Mariam, the five-times-Grammy nominated duo from Mali, will head to Green Man following their residency at the Barbican in July. Maribou State, whose latest album, Kingdoms in Colour, was perhaps their most dazzling and hypnotic work to date, will appear for the first time at Green Man, and alongside them, Texan band Khruangbin, which literally translates as “engine fly”, will bring their Zane Lowe and Cerys Matthews-approved bassy, experimental sound to the Black Mountains for their Green Man debut.

Next, Green Man are over-the-moon to declare that country-soul band Whitney will be joining us for the third time in four years; joining them will be Big Thief who are going on a UK tour in May which includes a huge date at London’s Roundhouse; a favourite from Green Man 2017, Julia Jacklin makes the trip from New South Wales to the idyllic setting in South Wales to perform her new album Crushing – out in February 2019; another from the Southern Hemisphere, Aldous Harding, makes her second appearance at Green Man; whilst Richard Thompson released 13 rivers in 2018 – his 18th studio album – and continues to tour worldwide and will return to Green Man for the first time since 2008.

Plus we’ve still got another headliner and a whole host of other artists to announce! Keep your eyes peeled for further announcements…

The full first line-up announcement is as follows: 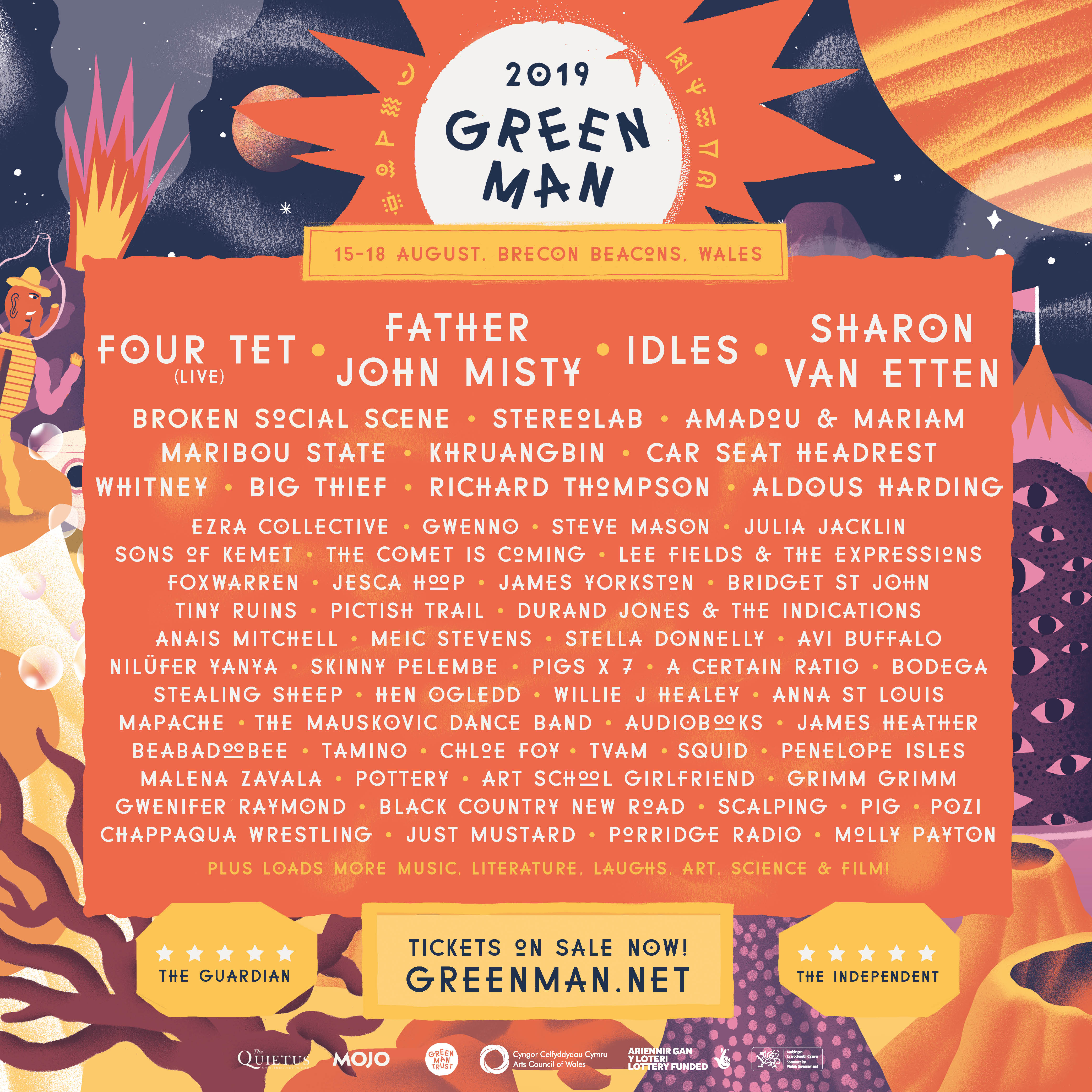