A confession: I think I may have a kind of uncharacteristic fondness for Abergavenny. What an odd thing to declare, even as I write the words I stutter back upon my familiar self as if sold on a sentimental misjudgement. Regrouping, I find the assertion is quite solid and true perhaps for me as it is for others who live in or around the town or, indeed, travel miles in for its shopping splendours. And something else.

I have done my share of roaming and witnessed from time to time the almost obligatory decline in once-thriving agricultural towns, in this area and elsewhere. For example, Brecon, surely is not as it was in its ‘heyday’, if the noun actually befits the memory (perhaps not) of those better than my own. Hay’s days, as in Hay-on-Wye is a far different scene to the one I remember in the early eighties. The difference between these two, Brecon and Hay, one might deduce as simple remodelling, changing, adapting, for better or worse as is the case with Hay and little to nothing of the aforementioned, sadly, with Brecon. It has its Jazz Festival of course and other event cynosures; Hay its Literature and Abergavenny its Food Festival. But the loss is regnant if one were to walk the streets on a midweek and reflect on Brecon’s glories of historical and post-historical yore as a thriving hub to which many once flocked.

Is this a hankering after the old while scorning the new? Am I of that age where the playing of similar biased antics is par for the course? I don’t know, I would hope not. I certainly used to relish the experience of book rummaging in the literary wild west of Hay-of-Old. Booth’s Bookshop, beautiful as it no doubt is in its current incarnation, was more akin to potholing than perusing the shelves for a lucky find. Stepping warily down into a dank, dusty and quite dangerous basement, as I recall, wellies and hard hat were actual safety equipment the well-prepared donned in order to minimise the risks of harm. Spiders like mops hung in the drafty corners and the cobwebs were of sci-fi monster proportions. Ah, happy days.

I still like a good rummage and to that fancy, Abergavenny matches up. The market of course, always something to titivate the keen buyer on the hunt for a quality bargain. The fact that one can really get all one needs in Abergavenny save for the more specialised wants, say, a jet-ski or a pair of seal-skin boots (I did look, it can get quite cold on the canal you know). But for me, the charity shops, strategically distanced as they are across the town so that one can weave leisurely from one into the other.

Generally speaking the proliferation of these kind of shops, many would grumble, signals death in the high street, a dumbing down of both choice and standards, that fatal whiff of mothballs permeating beyond the liminal and leeching into the very pavements outside. How strange then to me that it is the opposite effect which seems to be the case with Abergavenny. In my first few months in the area having left behind a lot of things from a previous life, including a large wardrobe of clothes, I decided to dress new by buying old. I would reinvent my style, I thought, become a kind of fashion outlander, careless if not exactly rebellious of any obvious trend as such; more aiming for what fit and what was functional come winter living on a narrowboat. So my attire was/is probably a cross between Bertie Wooster and Captain Birdseye. Some of you, broad as my description is if one were to spot the fashion subtleties betwixt these extremes, may have recognised me in the market or any one of the charity shops…? White beard, dickie bow…? Only half kidding.

I’m sure I recognise all of you, by the way, fellow Abergavennyites, identities woven into all of us by where we live and grow as individuals, yet part of a wider, uniquely identifiable community. And one of the joys of being in a place where crowds congregate for mutual herd-shopping is to people- 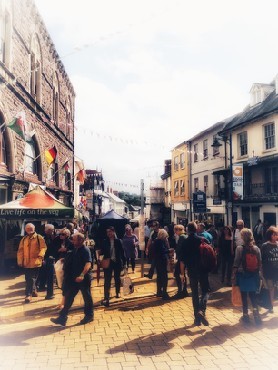 watch as they go about their business. As human sport goes, is it not, up there with the best of idle eyeing for no other purpose than to allow the mind some free time, down time, to take in the visual drama of the Other. So what I am saying is that Abergavenny is a watcher’s paradise too, amongst many other things. And never is this more gorgeously played out if coupled with sound it has to be said; ‘eavesdropping’ to give it its proper name.

The sheer obliviousness to his frustrated moans to move along tickled me no end, and it was then that I remembered the joke:

A man goes to the doctor and tells him, ‘I think my wife maybe deaf…’

‘A common complaint,’ says the doctor haughtily, ‘easily confirmed. Go home and when she has her back to you, ask her something. Start at about ten feet away, then closer, then closer still. If you get right up close behind her and no response, there you have it, your wife is certainly deaf.’

The man goes home and sure enough the opportunity presents itself, his wife is cooking at the stove. The man casually measure his distance across the kitchen then says, ‘What are we having for tea…?’

He draws a few feet nearer and repeats, ‘What are we having for tea…?’ No reply.

Then, standing right behind her, raising his voice, ‘I SAY, WHAT ARE WE HAVING FOR TEA…?’

His wife turns sharply around and shouts, ‘FOR THE THIRD TIME!!! CHICKEN!!!’

Little did this real couple know, but they had made my day. I quite often feel like this after spending an hour or so in Abergavenny bumbling around, somehow quite lifted by its many material offers as well as the people whose continued presence is the very lifeblood to the town. Maybe that is what is missing in all the other places: people, the who, what and where that makes them who they are.